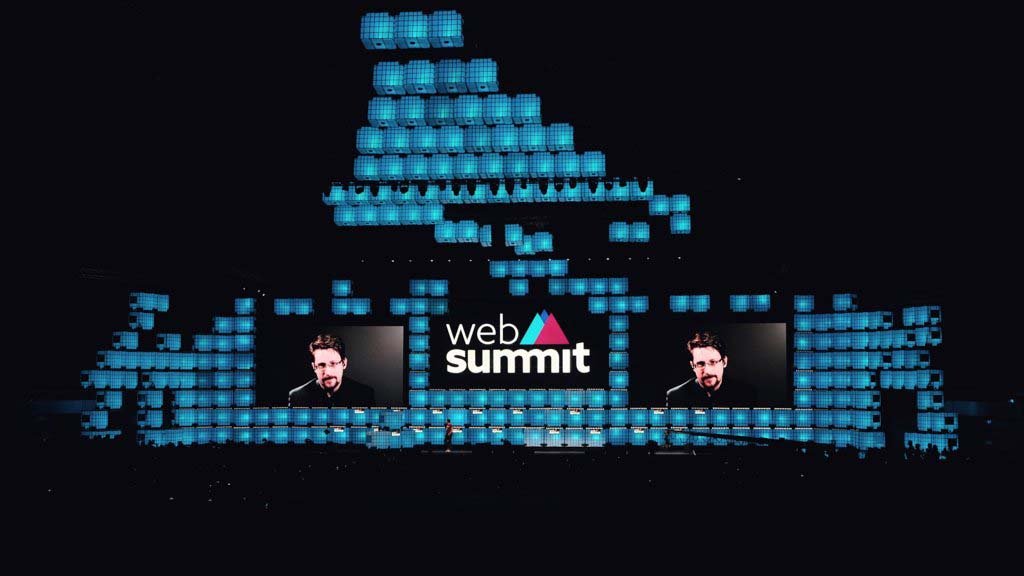 One of the world’s biggest tech conferences – Web Summit – kicked off last night in Lisbon, Portugal. The first item on the program: a conversation with American whistleblower Edward Snowden via video link in Russia – and I was there to witness it.

It’s challenging to paint a picture of what it’s like to be at Web Summit, the size of the crowds is simply mind-blowing: 70,000 attendees. So many, that thousands of people who arrived too late yesterday evening could not make it into the Altice Arena. I was one of the lucky ones and the 50 minute slow march through security checkpoints was worth it for what was to come: a no holds-barred talk by Snowden, who at one point said:

What do you do when the most powerful institutions in society have become the least accountable to society? I think that’s the question that our exists generation to answer.

I’d like to share with you something he said at the end, referring to social media and tech giants:

The public, my generation, particularly the generation after me, they no longer own anything. They are increasingly not allowed to own anything. You use these services, and they create a permanent record of everything you’ve done. Simply by having your phone in this room, on you, in your pocket, not even using it, but simply having it turned on registers your presence at this event… because your phone’s association with the Wi-Fi points that are around… Your phone’s association with the cellular towers that are around it… And this is the thing that people miss.

All of these companies, all of these governments go “Oh data collection, data protection.” It’s all very abstract. But data isn’t harmless. Data isn’t abstract when it’s about people. And almost all of the data that’s being collected today is about people. It is not data that is being exploited. It is people that are being exploited. It is not data and networks that are being influenced the manipulated, it is YOU that is being manipulated. And right now, the reason that is so, and the reason surveillance and collection is so much of a problem, is because we have to trust everybody on the network. We have to trust everyone that we pass on this hostile path of the Internet. All of the routers, all the Internet service providers that you cross. If you have to trust Cisco or Juniper or Huawei or Nokia, we have a problem because you can’t trust any of them. They will all act in their own interest rather than the public’s interest broadly. Whether it’s a private company or a national telecommunications company, it is an institution of power. And our communications are vulnerable today to every single one of them. Until we change the model.

Interestingly, Snowden was cut off by the presenter, saying they were out of time, right after he finished this sentence. I thought it was a bit curious, considering he was arguably the most high profile speaker at the event. But almost immediately, a thought occurred – shared by other attendees, who discussed this on the way out of the venue. Could it be that he was cut off because of his mention of Huawei and how we “can’t trust any of them”? Because who was the speaker appearing on stage shortly after Snowden? Huawei’s Rotating Chairman Guo Ping.